I guess you could say that I knew how the evil witch felt when she saw Snow White.  When I walked into the hospital room that morning, to greet my baby brother, there he was. A beautiful cream-colored baby with golden hair, such a stark contrast to my caramel skin and dark curly waves. He was a delicate little thing who had to endure a difficult labor due to the umbilical cord being wrapped around his neck. He was a miracle. I loved that baby, but I was also a little jealous, hence the evil witch allusion.

I was a hefty baby and I gave my mother’s hips a bit of a trouble upon my birth. I like to joke, that I just refused to come out of a vagina for obvious reasons. But I guess it made my parents decide to wait a while before having another child and thus the five years a part. For five years I had all the attention, all the presents and all the glory from EVERYONE. Then came Jarrett, there was so much about him that was different, and it would carry on like that for the rest of our lives.

He was a miracle. Due to his complications in the womb and at birth, he needed special care and had some developmental challenges. But he overcame them. He was the stud of our family, growing up. I had my brains and an award-winning personality to help, small kine over achiever at times. So, I held my ground. We grew up with two amazing parents who were still figuring it out and an outstanding support system of Grandmothers, Aunties and Uncles. I grew up with my secret struggles as did he. I had my talents, mostly academic and Jarrett had his, music and athleticism. I was a really good student and a well-behaved kid, so growing up I was often praised by family members openly and I enjoyed it, up until a certain point. I started to see and hear in my brother’s voice how my praise was becoming his curse. If I could go back in time I would tell my younger self to humble yo’ ass and take those moments as an opportunity to highlight your brother’s strengths, because he had many.

Internally, growing up, I was dealing with my sexuality and from a young age I always felt unfit to be an older brother. There is a lot of things I wish I said, I wish I did, I wish I didn’t do or say. In retrospect, I see how the enemy (Yes, this is a Christian blog) can start to plant seeds of division in children. How he can use our insecurities to impact our relationships with others even during our “innocent stages”. But I did the best I could with what I had. I felt so honored when my brother was 16 years old, and he was going thru a difficult season in his life. He came home from school and he just needed me. He broke down in my arms and I cried with him and did my best to console him. I felt validated in that moment. That I was an okay older brother.

In the process of coming to terms with my identity, I turned to the world. Jarrett, found his identity in Jesus Christ. His experiences with rebellion lasted a mere second compared to my decade. He knew God so intimately. Masked by Pride and ego, my insecurities often left me rolling my eyes at his spiritual evolution. But there was no denying it that my brother was on fire and then there was Easter. Being fit, athletic and on fire with the holy spirit my brother took up a cross. A big, heavy cross. He carried that symbol of redemption from Kahuku to Hau’ula and started an annual tradition in our family. I was proud of him, but it wasn’t for me.  I tried to get out of the Cross Walk every year we did it because I was so embarrassed. My friends didn’t understand and if they saw me walking it they would make jokes over beer. But I was there when Beth showed up and I was there to watch their eyes twinkle along the grueling journey around the island on foot. I was there at Kawaiha’o Church when I turned to my Aunty and said, that’s gonna be my brother’s wife. Fairy Tales happen to those who believe, and it happened for them.

My brother met the love of his life that day and their wedding was beautiful. Kristen was born 9 months later, and my brother had everything I ever wanted. Happiness. But you know what happened in Snow White, she was given an apple- a forbidden fruit by the evil witch. Though I never, ever wished any harm on my brother I did share with him a forbidden fruit that would lead to his downfall. I had exposed him to pornography at a young age, not knowing at the time what it was all about or what it would do. There are countless stories and examples of boy’s and their playboy magazines. It’s “normal”. Maybe, that is why sexual assault, harassment, rape and perversion is pretty “normal” among men. That forbidden fruit led to his fall as an adult and it shook my faith- whatever faith I had at the time. That moment as kids planted a seed of sexual immorality and addiction in his fragile mind that almost cost him and us, the family he has today. But because of that cross, he so gallantly carried on his shoulders all those years and what it stands for, he was redeemed. It didn’t happen over night and it was a VERY hard road. It also took the faith of a wife who stood by her vows and pushed through a spirit of infidelity, who fought for their legacy. My brother still has everything I ever wanted. He was brought back from death and instead of seven dwarves there are five children in their place.

My brother used to offend me. He often reminded me, just by his existence, how much I lacked. I blamed him for having a spirit of competition with me. I blamed him for being the one who made me feel uncomfortable. But, it was never him. It was about Him, our father in Heaven and what he had planned for us together, as brothers. Something no devil wants to see happen. As such, the enemy made a way at first, within me with a spirit of sexual immorality. That built up a wall of insecurities, that distanced myself from His love. Which caused me to stumble in my role as an older brother. It led to envy and then division. Division keeps us from attaining our purpose together in this life as the body of Christ. The cross that I felt forced to carry, I carried because of Jarrett and that same cross and what it symbolizes saved him and then me again and again. I have a praying brother. I have a strong brother. I have an amazing brother who has always been an example to me. It was the place of worship that he settled on years ago, that I would be drawn to and find the love that I was looking for all my life. Fairy Tales aren’t real, but God surely is. I can look in my mirror now and all I see is Jesus. He who lives in me, not because I am worthy but because He is able. We are better together in this world and the enemy knows it. Find those seeds he has planted, seek forgiveness for the parts you played, pull out the weeds, and know that redemption is possible for you even if you identify as the evil witch. My happiness is still in progress and it is already better than I could have ever imagined. I wouldn’t be able to say that if it wasn’t for my brother. You were born a miracle and you are still a miracle. 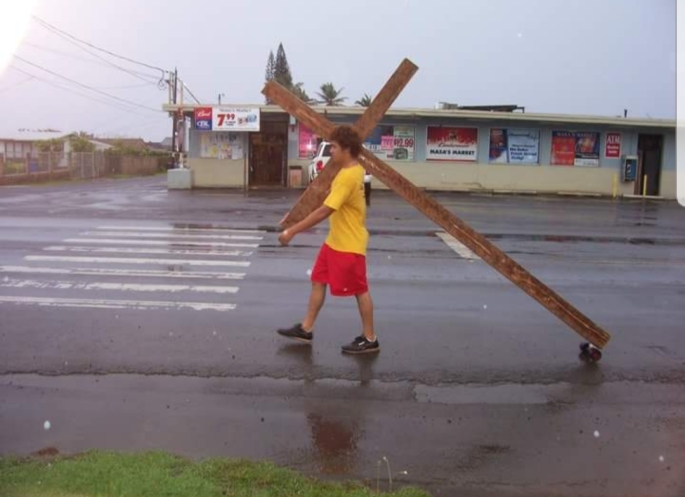